I’d never spent Christmas without my family before. It was the right decision this year, and I don’t regret it, but there was still something odd about being away over those festive days that I’ve always associated with being at home.

I decided to make the most of being in North America before flying back across the pond, and so for two weeks starting from the 23rd of December I stayed with a friend in a small town near San Francisco, California. It was a great opportunity to see the West Coast (“best coast” as my friend would say) and compare it to what I had seen in Boston, and the other easterly cities I had explored. The difference was remarkable. The common types of food available in Boston had been Italian and Spanish, with a dominance of the Irish style pubs for drinking.

Walking around SF it was surprising to see people lying out in the sunshine, in winter

Over in San Francisco I was delighted to see a much larger selection of Asian restaurants alongside Mexican diners, with a notable absence of ‘Traditional Irish Pubs’ or ‘English Style Pubs’. The city itself was laid out in the grid system common in the US, but which cities like Boston preceded due to their early settlement. The parks and waterways of Boston weaved through the city in a haphazard array, allowing random bursts of greenery to exists throughout the city: in SF, the parks were these enormous square affairs, laid out neatly with straight edges to fit perfectly within the gridded streets. 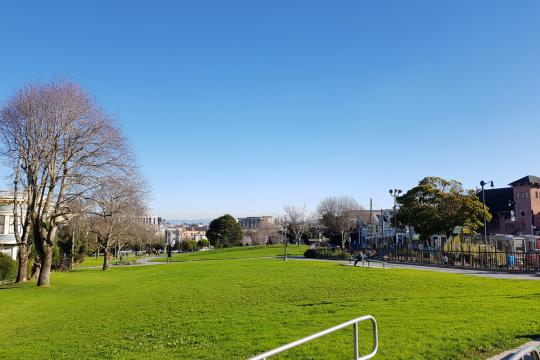 This Christmas was especially disconcerting thanks to the weather. Having left -18 degrees in Montreal, arriving in California’s +18 degrees was superb. It was my first Christmas without rain, or at least the threat of snow back home, and so walking around SF it was surprising to see people lying out in the sunshine, in winter.

What really made it all worthwhile, however, was the hospitality of my friend and her family. I was welcomed into their family Christmas traditions and quirks, and thanks to their kindness I could enjoy the festive season regardless of how far away my family where (5,300 miles). It was the perfect way to end my exchange semester, and when I boarded the plane for my gruelling 11-hour flight back to Old Blighty, I couldn’t have been happier with skipping my regular family Christmas. I had discovered a new one.